What is a press release?

A press release is pseudo-news story, written in third person, that seeks to demonstrate to an editor or
reporter the newsworthiness of a particular person, event, service or product.


How is a press release used?

Press releases are often sent alone, by e-mail, fax or snail mail. They can also be part of a full press kit,
or may be accompanied by a pitch letter.

What is the proper press release format? 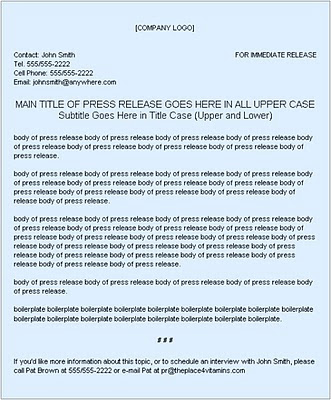 What should I put in my press release?

Let's stick with the theme: you run an vitamin web site specializing in weight-loss products.
Through the process described in the report, you've nailed down a nice, newsworthy topic – teenagers and how they deal with issues of weight. But that's a broad topic, not a story.
In the report, we provided a number of ideas for potential stories. Let's pick the first one and craft a press release.

The story: What do kids think about a "thin is in" society?
As you sift through your message boards looking for quotes, you see a trend appearing. There are lots of messages criticizing Hollywood actresses and pop singers for being too thin. Many girls are saying that seeing these women make them feel bad about their own bodies. A number of the boys are pointing out that they don't find ultra-thin women appealing.

Now you've got your angle -- your hook that will grab a reporter's attention:
Teenagers think that a "thin is in" society pretty much stinks.
Now let's get writing.

Before you write a word, remember this:

The reporter isn't interested in helping you make money or driving visitors to your site. He's looking for a story that will be interesting to his readers and pleasing to his editor. He could care less about your great selection, super customer service and commitment to quality. He wants to know only the info that will help him craft a good story about teens and their weight.

Take your ego out of it. Take your natural inclination to sell, sell, sell out of it. Look at your story with a cold, objective eye.

OK, let's get to our press release headline.

State your most exciting news, finding or announcement in as few words as possible. Emulate the headlines you see in the newspaper every day.

Don't worry, you'll get to plug your website soon enough. In the meantime, you've just thrown a meaty hook at the reporter.

It's Journalism 101 -- the lead paragraph includes the who, what, when, where and how of the story. If the reporter were only to read the lead of a good press release, he'd have everything he needed to get started. There's no room for BS, hype or sell. Just the facts.

Recently on theplace4vitamins.com, an online store dedicated to selling the best herbal products, teenagers had the chance to say what they thought about weight loss and whether a society that pressures young people to be thin is a good thing or a bad thing.

America's teenagers are angry at Hollywood for glamorizing ultra-thin bodies, and many girls say they feel too selfconscious about their bodies as a result of watching TV, movies and music videos. The findings are gleaned from more than six months of ongoing discussion and debate at the website theplace4vitamins.com. According to theplace4vitamins.com President John Smith, anger and resentment toward the Hollywood ultra-thin runs deep, particularly among teenage girls.

The Rest of the Press Release

The balance of the press release serves to back up whatever claims were made in the lead and headline. In this case, you'd pull some quotes from the message boards (an aside here: if you really were to pull quotes in this fashion, you should only use the poster's name or identifying information with his or her permission. Otherwise, simply say "a 14 year old boy said..." or "a 16 year old Midwestern girl added..." Also, if this technique appeals to you, be certain that a disclaimer appears on your message boards notifying posters that all posts become your property and copyright). Use enough supporting material to make your case, and to demonstrate that, whatever angle you're promoting, it wasn't something you slapped together carelessly. Next, a quote will help put in some perspective:
"I was surprised by the level of anger expressed in these messages," Smith said. "Teenagers are far more clued into this issue than most people would imagine." Or, you might ask an expert for a quote:

"This demonstrates once again the need to teach young girls and boys about how to develop a positive self-image,"said Jane Doe, author of "I Like My Body Just As It Is". "theplace4vitamins.com has done a true service by bringing these attitudes to the public's attention."

Finally, spend a sentence or two describing your company and what you do: theplace4vitamins.com was founded in 1997 to provide consumers with a wide choice of vitamins, supplements and
herbal products. The site offers a range of articles, research materials and message forums for the health conscious consumer.

This paragraph is known as the "boilerplate" -- an old newspaper term meaning a block of standard text that's used over and over again (e.g. the explanation of symbols on the stock price page). In this case, it's text that you might use at the bottom of all your releases.

Place your boilerplate right above the # # #'s.
One more trick: below the ###'s, add a line that says something like:
If you'd like more information about this topic, or to schedule an interview with John Smith, please call Pat Brown at 555/555-2222 or e-mail Pat at pr@theplace4vitamins.com

Some Key Things to Remember

* Stay away from hype-bloated phrases like "breakthrough", "unique", "state-of-the-art", etc.
* Always write it from a journalist's perspective. Never use "I" or "we" unless it's in a quote.
* Read lots of good newspaper writing, such as the New York Times or the Washington Post to get a feel for the style.
* Shorter is better. If you can say it in two pages, great. If you can say it in one page, better.